The oil industry is just one of many areas that are bustling in Brazil and last month Emirates SkyCargo delivered two large helicopters for energy giant Petrobras.

The helicopters – to be used by Rio de Janeiro oil rigs – were transported from Dubai International Airport to Viracopos Airport in Campinas, a route which the carrier will serve three times a week from 16th September.


“Transporting helicopters requires the highest degree of care and special handling, from when we take delivery of them, to loading, right through to their arrival in Sao Paulo,” said Dener Souza, Cargo Manager of SkyCargo in South America. “This is a great example of the expertise we can offer customers who want to quickly transport valuable out-sized items, while the addition of another flight is a tremendous boost to the service we can provide.”

“The logistics and careful monitoring of the cargo from door to door is the Emirates SkyCargo differential,” said  Alexander Gulla, president of AGS Group, the international logistics company responsible for transporting the helicopters. 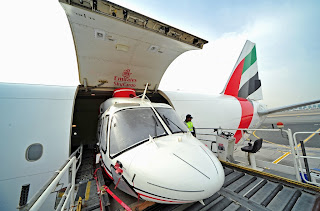 Emirates SkyCargo has been serving Campinas since October 2010, providing much needed support to the booming import and export industry generated by South America’s largest city. The 747-400F which operates the route has a capacity of 117 tonnes, meaning the additional flight will take the weekly total to 350 tonnes in both directions. The service operates via Frankfurt, Germany, on the outbound journey and returns through Dakar, Senegal.

In addition to the freighter flights to Sao Paulo, Emirates has been operating a passenger service to Sao Paulo Guarulhos International Airport, since 2007 with a Boeing 777-300ER, which can transport up to 160 tonnes a week in both directions in the belly hold.


And another 160 tonnes will be transported each week between the UAE and Brazil from 3rd January 2012, when the airline launches passenger flights to Rio de Janeiro, via Buenos Aires, also with a Boeing 777-300ER. This increased capacity will be key to meeting the burgeoning demand for direct, fast and secure air freight between Brazil and the Middle East, as well as Asia and Europe.

According to the Arab-Brazilian Trade Board, Brazilian exports to countries in the Middle East totalled US$ 6.41 billion (Dhs 23.5bn) in the first half of 2011, representing a growth of 33% over the same period last year.

The UAE is among the three main markets for Brazilian exports, totaling US$ 848.78 million (Dhs 3.1 billion) - an increase of 21.40% over the same period last year. The main products exported were meats, sugar, minerals, coffee and dairy products.


Imports from the Middle East also recorded a strong increase in the period, totaling US$4.55bn (Dhs 16.71bn) in the first half of 2011, a figure 41% higher than the same period in 2010. The main products were mineral fuels, followed by fertilizers and salt.

About Emirates SkyCargo
Emirates' 155-strong fleet is one of the youngest in the skies. Emirates SkyCargo’s fleet includes eight freighters (three Boeing 747-400Fs, two 747-400ERFs, two 777Fs and one 747-SF) and now serves 114 destinations in 66 countries on six continents.  In the 2010-11 financial year, Emirates SkyCargo saw a strong increase in revenue up 27.6 percent to a record AED 8.8 billion (US$ 2.4 billion). Cargo tonnage increased by 11.8 percent over the previous year to 1.8 million tonnes. Additionally freight yield per FTKM (Freight Tonne Kilometre) increased by 11.3 per cent.  Cargo revenue contributed 17.4 percent to the airline’s total transport revenue, one of the highest contributions of any airline in the world with a similar fleet.

eToro is the best forex trading platform for rookie and full-time traders.