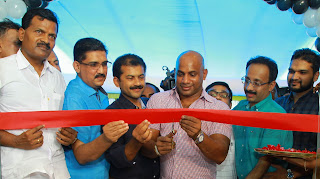 Kochi, August 03, 2015: Sketch Interiors, an emerging full-fledged company that integrates the best of concepts and systems in the world of interiors, has opened its second showroom in the state, in Kochi. The 7000 sq ft new showroom on the NH 47 Bypass near Maradu Junction here was inaugurated by Sanath Jayasuriya, former Sri Lankan cricket captain, today. Jayasuriya said it was a pleasure to be in god’s own country which offers a great amount of enthusiasm and vigour. Mr. Ramanand M.E, Managing Director, Sketch Interiors said it was a great privilege to have Jayasuriya to inaugurate their second showroom
The Sketch showroom displays world class multi-brand interior products and accessories which include furnishing products, customized furniture, modular kitchens, designer crockery sets, sleeping and bath accessories, decorative elements and much more. “Sketch specializes in interior concepts, space planning, sales and execution. It offers trendy interior concepts that match your mind and budget with contemporary and aesthetic styles that reflect our customer’s personality. It is the first of its kind showroom in Kochi which has all accessories and products on display,” Mr. Ramanand said.
“Sketch is also into projects of any magnitude on turnkey basis and consultancy service. On the execution part, the ultimate facilities in terms of all resource s- men, machine and technology - are strategically organized here to achieve the best as per our customer’s need,” he added.

The company’s first showroom with an area of 13,000 sq ft is at NH 17 Bypass, Palazhi Junction in Kozhikode.

Posted by Dubai News at 2:37 AM No comments:

Platform for Online Release of Movies Ready; Reelmonk.com to target Malayalis across the World


Kochi, July 19, 2015: A group of film crazy youths have come up with a novel platform to watch latest movies online, that too legally.  Reelmonk.com aims to bring Malayalam cinema to its users’ homes the same day they release in India.

Through Reelmonk, film producers can release and promote their movies across 2.5 million screens of Indians across the globe. They can also see how their movies are performing on a daily basis on a transparent dashboard.

Reelmonk.com, created by Xincoz Labs, is the brainchild of three 22 year olds from Kochi - Blaise Crowly, Vivek Paul and Gautham Vyas and is promoted by Konglo Ventures. “We are set to launch on July 20th with 15 movies for users to download, including ‘Nee-Na’ by Lal Jose and ‘Njan Steve Lopez’ by Rajeev Ravi. An idea that originated over a midnight phone call with a friend is today ready to launch after a long and exciting journey that was full of challenges, setbacks, straight out crashes and amazing moments to cherish”, says Blaise M Crowly, CEO, Reelmonk.com. “Piracy happens due to non-availability of content. When content is easy to access at a reasonable price we believe piracy will take a back seat” he added.

“Lot of effort and sacrifice goes into creating a movie and it is shattering when elements such as piracy, lack of releasing platforms and other issues destroy this work. We want to be a platform where all movies can reach viewers with the click of a button.” points out Vivek Paul, COO, Reelmonk.com. “With connected users, our platform enables movie producers to distribute their content in any countries they choose on the same day as they release in India,” he added.

“During my European tour, I met many Malayalis who complained about their inability to watch new Malayalam movies as and when it was released in India. They also shared that they were forced to watch pirated versions as they had no option to watch them legally,” said Lal Jose, the noted director who is releasing Nee-na through Reelmonk.com in US, Saudi Arabia and other select countries.

Noted film director Jayaraj points out to another scope of the venture: “Malayalam movie industry is rich in diversity of great content. I have noticed great interest for Malayalam movies from a global community of movie lovers. Reelmonk.com will give them the opportunity to access the Malayalam movies they love easily, especially with features like pay per download and subtitles”.

Never miss the opening scene of a movie again. With Reelmonk, you control your film viewing experience. With prices starting as low as INR 180 for a movie, Malayalis can now watch the latest films at home through Reelmonk.com

Prestige Group’s IT Tower to be developed at SmartCity Kochi


Kochi, July 09, 2015:  Prestige Group, one of south India’s leading property developers with numerous projects in the residential, commercial, leisure and hospitality sectors, will be constructing an IT tower at SmartCity Kochi. The agreement for the construction of the 2.61 lakh sq ft tower to be developed as part of the 246 acres’ SmartCity project was signed between SmartCity and Prestige Group at the SmartCity Kochi Office.

Prestige Group has already got two IT complexes in Bengaluru to its credit, located at Sarjapur-Marathahalli Outer Ring Road housing many big corporate like JP Morgan Chase, Oracle, Nokia, Airtel and Altair Engineering. Tech Park-11 Electra is built on 22 acres of land with 3 independent towers having 2 wings each of an average floor plate size of 40,000 sq ft. Tech Park-111 has a total built-up area of 3.6 -3.8 lakh sq. ft.

Dr. Baju George, MD and officiating CEO of SmartCity Kochi, said it was a happy moment as some of the big companies are coming forward to be the co-developers of the prestigious SmartCity project of Kerala. He further said that having a renowned real estate co-developer like Prestige on board will ensure that the building developed by the group will be of a superior quality as envisioned for the business township of SmartCity Kochi. Prestige Group's rapid growth now has over 184 completed projects to its credit. Prestige was also recently awarded the CRISIL DA1 Developer Rating in recognition of the quality of their projects and the ability to deliver projects completed on time, making them the only property developer across India to have received this distinction.

The agreement with the Prestige Group has been signed at a time when the first IT complex of SmartCity Kochi with a total built-up area of 6.5 lakh sq ft and 100,000 sq ft on a single floor plate targeting LEED Platinum rating is nearing completion. The first phase of the project (SCK01) would generate 6,000 direct jobs in the IT sector. Construction works on the second building with a floor space of 6.3 lakh sq ft would also start this year. It would generate another 6,000-7,000 jobs.

In the meantime, construction of infrastructure facilities like roads, supplies and landscaping are also fast progressing while joint-developments teamed up with major players in each sector of various social infrastructure milieus including housing, healthcare, education and recreation are also under various stages of construction.

Jointly promoted by Dubai Holding and Government of Kerala, the SmartCity Kochi along with its co-developers will jointly build around 50 lakh sq ft of space housing the IT/ITES industry in a span of 30 months that will generate another 50,000 jobs.  The project will also include Information and Communication Technology (ICT), Media, Finance and Research & Innovation clusters. SCK is the third such undertaking by Dubai Holding after the acclaimed SmartCity Dubai and SmartCity Malta.


Kochi, July 09, 2015: Admission for the KITCO Business Leadership Program commencing from July 15, 2015 has been started. Interested candidates are requested to pre-book seat now at myenterprise@kitco.in before July 12, 2015. Applications can be sent to KITCO HO on or before July 15. The program has already received positive reviews as a must-do course for startups and aspiring entrepreneurs as it is among the few courses in the country offering entrepreneurship skill training, incubation and business consultancy combined in one program. The 12-week program will consist of 12 days of classroom training, 6 weeks of incubation, 2 weeks of field study/survey and 2 weeks of fund raising. For more details, please contact at 85929 69583.
Posted by Dubai News at 12:04 AM No comments:

Kochi, June 13, 2015: The Consumer Federation Supplier’s Association (CFSA) has urged the Government to immediately release the huge sum due for payment to its members against supplying various essential commodities and products to Consumerfed over a period of two years. As on date, the accumulated arrears worth Rs. 387 Cr is the outstanding amount payable to around 120 suppliers, said the office bearers of the association in a media conference here. They said they have been supplying things to Consumerfed with the help of loans taken from banks and other financial institutions and due to the present payment crisis, many of the suppliers are on the verge of committing suicide by not being able to pay even the interest on such loans, said Ullas M.V., President, CFSA.

The association has been knocking several doors to release the due amount, but to no avail. “The office bearers of CFSA had submitted a memorandum citing their grievances to the Chief Minister and the KPCC President a few months back. After considering our petition, it was decided to lend a total of Rs.150 Cr from five District Banks on government guarantee. Though a government order was released, the amount has not been released yet,” Ullas pointed out. The office bearers distributed copy of the G.O to media persons. They alleged it was the cold war between the concerned minister and the MD, Consumerfed that is delaying the disbursing of the dues. Because of the piled up arrears, the suppliers have been boycotting Consumerfed tenders for some months now. This will affect the supply of essential commodities through the Nanma, Neethi, Triveni stores of Consumerfed which has been playing a significant role in controlling prices of essential commodities and products through effective market intervention. As the Ramzan and Onam season is approaching, the present payment crisis will ultimately hit the common man badly, being the major benefactor of Consumerfed stores, they said.

The association has decided to stage a dharna in front of the Consumerfed head office at Gandhi Nagar in Kochi on Tuesday (16-06-15) and Wednesday (17-05-2015) demanding immediate release of the arrears. The association warned that if their demand is not met, they will be forced to intensify the agitation that will include a march to the residence of the minister.  Pauly T.A., Association General Secretary; Naushad K.H., Treasurer; Nazar Kallar, N.P. Antony, both Vice Presidents of the association and Sreejan, Joint Secretary were also present at the media conference.