Kochi: Finding tough to learn basics of stock market? Here you have a solution thanks to Hedge Equities, one of the leading financial services company based in Kochi. Aimed at educating younger generation about the basics of stock trading, Hedge Equities has launched a mobile game app, TORO e ORSO, an Italian term for ‘bull and bear. The game was earlier launched as a board game and well received among the youth. According to the company, the game will make learning the basics of stock trading, simple. The app was developed with the support of Hedge School of Applied Economics, Kochi. The company said that objective of the game is to make people understand that stock market is not a pure game of chance as it depends on lots of other factors, both globally and nationally.

Commenting on the app, Alex K Babu, Managing Director, Hedge Equities, said that using apps and games is the best way to teach youngsters about the basics of share trading as they acquaint with everything easily through such games.

Initially, players will get a virtual amount of Rs 5000, which can be used to invest in any one of the ten sectors – oil and gas, telecom, FMCG, automobile, realty, pharma, power, IT, metal and banking. The sectors will be marked on the spinning wheel. With the spinning of the wheel, chance cards appear and it indicates an effect that could positively and negatively affect any of the sectors. For example, a chance card might have in it, ‘deficit monsoon’ and therefore it will lead to a loss of 100 points if the player has investments in FMCG sector. Another chance card may indicate “entering into more verticals in association with other global players” and it will lead to increase in the value of the stock by 50 points.

After each chance cards, scores will be displayed and a micro card will appear after each level. A micro card will announce news affecting all the ten sectors and mutual funds simultaneously. After the completion of all rounds, a scoreboard will show difference between gains made and losses incurred by the player. According to the developer, the game enables the player to assess his decisions by analyzing the portfolio and the score.

“When it comes to financial inclusion, ESAF cannot be excluded. We have proved it once again” said an elated K. Paul Thomas after receiving the award. The award is an acknowledgement for people, projects and institutions that have made significant contributions to the cause of financial inclusion or financial deepening. He added that it was a forum to accept those who demonstrated business success through strategy, innovation or use of technology by adhering to the norms of financial inclusion.

ESAF Microfinance was chosen for the awards from 950 nominations received in different categories such as Business Leadership, Digital Inclusion, Social Inclusion, Customer Service and Financial Inclusion. The three stage selection process comprised of sending the nomination in the prescribed format, presenting our case before the eminent jury members and setting up of an exhibition stall to present and display the products and communication materials. 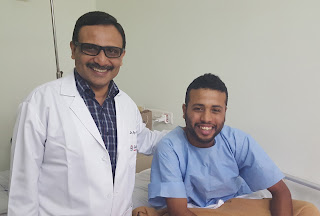 Kochi: Doctors at VPS Lakeshore successfully performed Peroral Endoscopic Myotomy (POEM) on a 24-year-old Oman national, who was finding it difficult to consume solid food for the past four years due to Achalasia, an esophageal motility disorder involving the smooth muscle layer of the esophagus.

The patient, Mohammed Khamis, left the hospital on the fourth day after the endoscopy on June 8, 2016, according to the hospital. “Muhammed Khamis can now consume food without any difficulty,” said Dr. Roy J. Mukkada, Senior Consultant and Head of Gastroenterology, VPS Lakeshore who performed POEM on Khamis.

VPS Lakeshore was the first hospital in Kerala to begin the endoscopic procedure for treating esophageal motility disorder two years ago, according to hospital authorities.
The Achalasia patients are faced with difficulty in swallowing food and chest pain. It can be diagnosed with esophageal manometry and barium x-ray. For treating Achalasia, usually either Laparoscopic Myotomy or Endoscopic Balloon Dilatation is performed. But the patient will have to stay for a longer period in the hospital for recovery and scars of the surgery will remain forever, if Laparoscopic Myotomy is performed. In Endoscopic Balloon Dilatation there are chances of bursting of the esophageal wall and leakage. However, POEM doesn’t have such problems and the patient can consume food on the third day and return home on the fourth day, said Dr. Roy J. Mukkada.