Tefal, the inventors and market leaders of easy to clean Teflon coated pots and pans, have given the kettle a complete makeover to keep up with a fast moving lifestyle and conserve energy.

Tefal’s Quick Cup was launched recently in the Gulf countries after a successful introduction of the product in many countries across Europe including the UK, the Netherlands, Germany, and Scandinavia and more recently in Russia.

What this revolutionary special product offers is quick and convenient hot water on demand in just three seconds. Quick Cup is the only water heater of its kind to offer instant hot water which does not need any pre-heating thanks to the Opti Quick heating element system.

Quick Cup from Tefal cuts the waiting time with the use of a pump and Upstream Cartridge system where water is sucked through the cartridge by the pump in three seconds.

Other benefits of the product are the reduction in lime scale which improves longevity of the product. This also removes temporary hardness. With the use of the Claris filtration system, the heater also reduces the water’s chlorine content which makes for better tasting water.

Quick Cup also reduces copper lead and pesticide content for healthier water. Moreover, the product saves water as only the required quantity is heated. Users are also offered a choice of hot or ambient water temperature.
Posted by Dubai News at 9:11 AM No comments:

Citizen Watch Company, the world’s largest watchmaker from Japan, opened its first exclusive boutique in the UAE at Lamcy Plaza, Dubai, recently. The outlet is part of the Japanese Brand’s ongoing expansion in the region with several stores opening in countries like Oman and Egypt.

Speaking during the inauguration of the new 50 M2 boutique in Lamcy Plaza, Mr. Toshio Tokura, Senior Managing Director of Citizen Watch Co. Ltd., said the inauguration coincided with the 35th anniversary of Citizen in the UAE. “The Middle East and the UAE has always been an important market for Citizen and thanks to our partner Juma Al Majid, we have been successfully present in the UAE for 35 years.”

Along with this new boutique, the company maintains 400 point of sales (POS) across the Gulf countries which are strategically located in shopping malls and prime retail streets.

During the inauguration, Citizen’s Global Radio Controlled Chronograph was introduced. The watch is the first analogue chronograph capable of receiving time signals on radio wave and automatically adjusts the time to the most accurate time which is the atomic time. This watch is powered by Eco Drive movement, the revolutionary concept from Citizen where the watch harnesses the power of light from any natural or artificial source and converts it into electrical energy.

During the last 80 years Citizen has expanded its business throughout the world and has achieved recognition as a global brand. The past 30-year period has coincided with the company’s dramatic rise to its current position as the world’s largest watchmaker, a distinction Citizen has held every year since 1986. Beyond sheer size, Citizen is also recognized as a worldwide leader in advanced technology and with the introduction of the Global Radio Controlled Watch, Citizen reaffirms its position in the watch making industry.
Posted by Dubai News at 9:10 AM No comments: 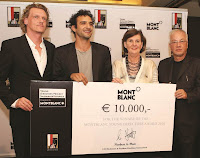 The theatre project was again sponsored entirely by the International Culture Brand Montblanc. As in previous years, the sale of the Salzburg special edition “Hommage à Max Reinhardt” generated additional sponsorship funds and, once again, allowed a fourth production to be staged.

For this year’s competition, Dr. Thomas Oberender, Artistic Director of the Salzburg Festival, and Martine Dennewald, Curator, selected four young directors and their ensembles from the Netherlands, Belgium, France and Germany. The nominees were:

The Swedish-born director Jakop Ahlbom, who has worked in the Netherlands for several years, with INNENSCHAU – a theatre thriller, a journey under the surface of the human psyche into a realm of secret wishes and bizarre fantasies which are revealed in layers during the performance to become more and more visible until the audience are left sitting in the dark – swallowed by the unfathomableness of a strange world.

Sylvain Creuzevault and his company d’ores et déjà from Paris with their production NOTRE TERREUR – a play about how the theatre can look at and contemplate the terror of the French Revolution. The play shows the incredible willpower of Robespierre and his fellow members of the revolutionary government in their attempts to reinvent democracy, but also focuses on their desperation at failing in the face of the revolution’s ideals.

Angela Richter from Germany with TOD IN THEBEN, a play written by the Norwegian author Jon Fosse, which comprises the three great tragedies about the rise and fall of King Oedipus, his exile on Colonus and the dire fate of his daughter Antigone in a terse drama of great emotional density. Angela Richter sets this most primeval of family dramas inside a light installation in which the mythical protagonists Oedipus and Antigone appear and make us question our concepts of blame, silence and solitude, and examine what they mean for our contemporary world.

Claude Schmitz from Brussels with MARY MOTHER OF FRANKENSTEIN – a piece about the old dream of creating a human being in our own image. The show presents a living nightmare which narrates the life and works of the author of Frankenstein, Mary Shelley, and also references the incredible pace of biotechnology we are witnessing today.

The Young Directors Award 2010 is unanimously given to Sylvain Creuzevault and his company d’ores et déjà. With NOTRE TERREUR, the jury values in particular the impressive performance of an accomplished ensemble in which the actors are turned into co-directors and the director himself becomes a primus inter pares. The company has made the story of the French Revolution and its implications for the present accessible for youthful enthusiasm; they show the failure of the highest ideals and the dangers of a dictatorship of the virtuous. The company succeeded with sparse means and in direct contact with the audience, through clever use of the space and increasing dramatic force.
Posted by Dubai News at 9:08 AM No comments: 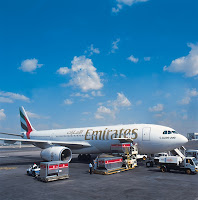 DUBAI, U.A.E 31st August 2010: Emirates will increase services to Al Medinah al Munawarah to seven flights per week from 31st October 2010 underscoring the important economic and cultural ties between the UAE and the Kingdom of Saudi Arabia.

“Saudi Arabia is an important market for Emirates and our new daily service to Al Medinah al Munawarah is key to our continued growth there. In the last two years we have increased operations to the Kingdom from 17 to 25 weekly flights and we will continue to work closely with the Saudi Authorities to implement additional services,” said Ahmed Khoory, Emirates’ Senior Vice President Commercial Operations, Gulf, Middle East and Iran.

Mr. Khoory continued: “This daily service will offer our customers in the Kingdom with even more choice, helping to connect both business and leisure travellers not only to Dubai but also our extensive worldwide network. There is significant demand for travel in and out of Al Medinah al Munawarah from across our network and we are confident that these new flights will be well received by our customers.”

The service is operated by an Airbus A330-200 aircraft, offering 12 seats in First class, 42 seats in Business Class and 183 seats in Economy.
Posted by Dubai News at 9:06 AM No comments: