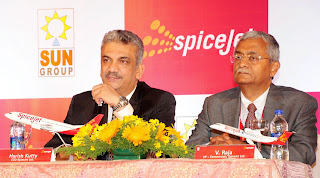 SpiceJet is offering daily direct flight from Kochi to Male and Dubai and inaugural ticket fares are as low as Rs 4,999 (one way fare inclusive of all taxes).

Male is the capital city of Maldives and is considered a preferred tourist destination. The inaugural flight from Kochi to Male was flagged off at 12:50 pm today in a function held at Cochin International Airport.

The airline has deployed Bombardier Q400 aircraft on Kochi-Male route. The Bombardier Q400 NextGen turboprop aircraft can accommodate 78 passengers and is widely accepted as the best short-haul aircraft globally.

“Kochi is an important destination for SpiceJet. We are launching two international flights from Kochi connecting Male and Dubai. This is besides, our strong presence on domestic routes from Kochi. With these launches, people can enjoy affordable flights on international routes,” said SpiceJet Chief Commercial Officer Mr. Harish Kutty.

SpiceJet also announced the launch of Kochi-Dubai daily direct flight from December 10, 2012 onwards. SpiceJet has been working on new destinations in domestic market as well as on international routes as the carrier has set its sights on expanding its coverage in phases on a regular basis. Under the network expansion plan, SpiceJet will also be launching daily direct flight to Dubai from Ahmadabad starting from December 19, 2012.

On our Kochi – Dubai and Ahmedabad - Dubai route we will deploy our Boeing 737 -800 aircraft which have a capacity of 189.

With these new routes, the total number of international destinations on SpiceJet network would increase to five. At present SpiceJet flies to Kathmandu (Nepal), Colombo (Sri Lanka), Kabul (Afghanistan) and Dubai (UAE)

Posted by Dubai News at 8:26 PM No comments:

The Buildings & Factories IC, has won new international orders in UAE worth `595 crores for the construction of a hospital building and other associated facilities.

In the Solar Business sector, L&T Construction - India’s largest player in solar power has bagged new EPC orders worth ` 280 crores for the construction of Solar PV systems in Rajasthan from multiple customers.

Background:
Larsen & Toubro is a USD 13.5 billion technology, engineering, construction, manufacturing and financial services conglomerate, with global operations. It is ranked 4th in the global list of Green Companies by the reputed international magazine Newsweek, and ranked the world’s 9th Most Innovative Company by Forbes International. L&T is one of the largest and most respected companies in India’s private sector. A strong, customer–focused approach and the constant quest for top-class quality have enabled L&T to attain and sustain leadership in its major lines of business over seven decades.

Posted by Dubai News at 8:24 PM No comments:


Mumbai, November 28, 2012: Vodafone India, one of India’s leading telecommunications service providers, today launched Vodafone Secure Device Manager for corporates. Vodafone India is the first Indian telecom operator to launch this unique and innovative solution which acts as a simple and flexible tool to keep the data on smartphone & tablets secure, helping business grow without the fear of data security breach.
• Remotely lock or wipe devices in the case of accidental device loss or theft
With the Bring Your Own Device (BYOD) concept picking up pace, increasing number of people prefer smartphones and tablets to access the company’s data. Securing these devices, and hence the data, has now become extremely important. Vodafone Secure Device Manager allows your people to work with their smart devices without compromising your company’s security.
Vodafone Secure Device Manager serves as an important solution for Chief Information Officers (CIO’s) & Chief Information Security Officers (CISO) of India Inc. It provides them a secure management console which allows them to gain visibility to and remotely configure & secure their organisations device estate. Vodafone Secure Device Manager empowers IT administrators by allowing them to remotely manage security policies, device settings, certificates, applications, operating system etc. Vodafone’s solution can prove to be invaluable in the event of mobile device loss, it allows users to remotely lock or wipe all information from their smart device.
Speaking at the launch of Vodafone Secure Device Manager, Naveen Chopra, Director, Vodafone Business Services said, “We at Vodafone have always been excited about innovations in the smartphone & tablet industry as they’ve enabled our customers to enjoy an un-paralleled level of user experience. While the ‘Bring Your Own Device’ phenomenon has empowered our users, it has also exposed a gaping hole in the security armory of our corporate customers. We’re witnessing an increase in Mobile Data security concerns raised by corporate customers. Vodafone Business Services is proud to introduce the ‘Secure Device Manager’ solution. It will allow IT administrators to easily manage & secure their organization’s smart device fleet, via a simple & easy to use console. It’s the only way to let your people bring their smart devices to work without compromising your company’s security.”

Dubai: The world’s leading business & economic magazine, Forbes ME, yesterday released the 2012 list of region’s top Business Leaders in the Arab world, both listed as well as private & family owned businesses. Top business leaders from across the Middle East & North Africa region representing a multitude of industry feature in this prestigious list. Some of the top entries in the list include Osman Sultan, CEO of Du, Abdul Razak Ali Issa, CEO - Bank Muscat, Abdulrehman Al Fadley of Almarai, Ahmad Abdullah Abdulaziz Alzabin of ALAFCO Aviation, Fatima Al Jaber, Rajah Easa Saleh Al Gurg and Yusuffali MA, the head of Lulu EMKE Group among others. This is the first time Forbes is featuring family & private owned business in their honour list and also the first time an Asian is being chosen. Yusuffali MA was awarded the "most influential Asian Business Leader in the MENA region" for his role in revolutionising the retail sector in the region with LULU brand of hypermarkets and supermarkets across the region, giving strong competition to some of the world’s top retailers with 104 stores. Rajah Easa Saleh Al Gurg, Managing Director of Easa Saleh Al Gurg Group was honored for being the most influential Arab Woman in Family Business while Fatima Al Jaber got the honours of being the most influential Arab Women in Private business. The list was unveiled at the glittering “Forbes ME CEO Forum” and gala dinner held at The Atlantis, Dubai in the presence of top business leaders and industry stalwarts. H.E. Dr. Rashid Ahmed Mohammed Bin Fahad honored these top achievers and lauded their role in the economic development of the region as well as urged them to keep supporting the young generation.
Posted by Dubai News at 4:26 AM 1 comment: