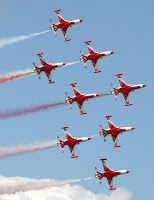 the Turkish Stars, is the latest aerobatic squadron to confirm its attendance at the 2011 Al

Ain Aerobatic Show. The Turkish Stars will demonstrate their amazing airborne skills for the

Air Force’s 134th Acroteam Squadron Command, which has performed in hundreds of

sensational displays around the world. The Turkish Stars are the only national aerobatic team

to fly with formations of eight supersonic aircraft, and in 2001 they sealed a world record by

performing to an audience of over 1 million people at an aerobatic show in Azerbaijan.

Authority (ADTA), which organises the Al Ain showpiece in conjunction with the UAE Armed

Forces. “Spectators are guaranteed a dazzling exhibition of aerobatic arts when the team flies

above Al Ain in February. By joining some of the world’s best display teams, they will help the

Al Ain Aerobatic Show to raise the benchmark for world-class spectacles in the Middle East.”

Now in its ninth year, the show has become firmly established as one of the world’s top five

aerobatic events. Pilots from over a dozen of the best formation teams on the planet will visit

the Oasis City to manoeuvre their agile aircraft over four days, in front of expected record

Taking centre-stage at the 2011 event will be the unique, multi-discipline FAI Desert

Challenge. Arranged by the Fédération Aéronautique Internationale (FAI), the international

featuring wing-walkers, subsonic jets and choreographed “dancers in the sky”. The Turkish

supersonic fighter jets of Team Viper, which will be performing their amazing mock ground

formation attack scenario for the first time in the Middle East.

Making their Middle East debut will be the Baltic Bees from Latvia, flying L-39C Albatros twin-

that was built for Britain's Royal Air Force in 1956, returns for a second consecutive year to

ADTA is significantly expanding the spectator village for 2011 to make it the largest to date.

Among the wide range of activities on offer for all the family will be karting, model aircraft

displays, a hot air balloon and VIP flights, while a greatly improved selection of F&B outlets

will cater to every taste.

years old, while children under three enter free. Visitors can check the website for details

on how to purchase tickets – www.alainaerobaticshow.com. And by accessing the Al Ain

also have a once-in-a-lifetime chance of winning a flight with one of the pilots at the show.

Commonly known as the Oasis City and central to the cultural heritage of the country, Al

Ain is approximately 80 minutes drive from Abu Dhabi and Dubai, with both drives offering

and promotion of the emirate as a world-class destination of distinction. Its responsibilities

include; destination marketing; infrastructure and product development and regulation and

classification. A key role is to create synergy in the international promotion of Abu Dhabi

through close co-ordination with the emirate's hotels, destination management companies,

airlines and other public and private sector travel-related organisations.
Posted by Dubai News at 1:15 AM