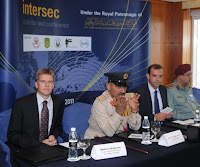 DUBAI: Homeland security, biometric technology, perimeter security and access control are expected to be amongst the

key areas of interest at Intersec trade fair and conference 2011, the premier trade and networking event for commercial

security, homeland security and policing, safety and health, fire and rescue and aviation security in the wider region.

According to organiser, Epoc Messe Frankfurt, security and safety concerns are increasingly gaining the attention of

government and corporate managements, as awareness grows about the need for greater preparedness to combat and

prevent terrorist and criminal threats. As a result, the market for homeland security, surveillance systems and policing

gear and equipment in the region is on a strong growth path.

Recent research estimates that UAE spending on Homeland Security is set to double from US$ 5.5 bn to US$ 10 bn in

the next 10 years*. Also the country ranked fourth place worldwide in total arms expenditure at approximately US$ 6.5 bn

The key drivers of this growth are expected to be biometric security, IT and infrastructure security and border and

perimeter protection. The Middle East region is an increasingly significant market for homeland security with heightened

Recent incidents have underlined the importance of CCTV and video surveillance in sensitive areas. As a result, Dubai

Police have announced that it will spend a further US$130 million plus, to enhance CCTV surveillance in blind spots over

“While no one can guarantee 100 per cent security, being prepared for any eventuality is vital,” said Major General, Dr.

lot about how to respond to difficult situations,” he said. “Learning from these and adapting our response and readiness

drills accordingly will empower us with the expertise to meet any challenges,” he added.

Intersec 2011, which takes place at the Dubai International Convention and Exhibition Centre from January 16th to 18th,

reflects the trends and developments in the industry and is a must-attend event for professionals, key influencers, security

The exhibition is held under the Patronage of H.H. Sheikh Mansoor bin Mohammed bin Rashid Al Maktoum and

“Intersec has always been more than just a trade event. We engage with all stakeholders in an effort to enhance

the levels of safety and security in our environment,” said Ahmed Pauwels, Chief Executive Officer of Epoc Messe

Frankfurt. “Thanks to the invaluable help of local authorities and government bodies, we are glad to be able to work

together to ultimately achieve that goal,” he added.

most comprehensive series of conferences and workshops staged at Intersec to date. This year, the conferences bring

together about 30 international safety and security experts, who will share their views and learnings on issues of vital

from international and regional squads, the Indoor Demo Area, an extensive outdoor demonstration of counter terror and

tactical deployment methods and the Exhibitor’s Experts Forum.
Posted by Dubai News at 1:07 AM