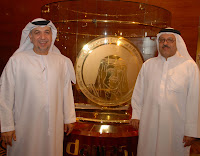 The coin is emblazoned with the image of His Highness Sheikh Hamdan Bin Rashid Al Maktoum Minister of Finance, Deputy Ruler of Dubai and the patron of the award; on one side and the Awards’ 10th Anniversary logo on the other.

Commenting on the medallion Prof. Najib Al Khaja, Secretary General of Sheikh Hamdan Bin Rashid Al Maktoum Award for Medical Sciences said: “We wanted to create a special memento for the tenth anniversary of our awards commemorating the years of dedicated service and support to the medical community globally. Having known Damas’ expertise in jewellery design and crafting, we commissioned them for the creation of this unique medallion which has found a place in the Guinness Book of World Records by breaking their 1986 records as the world’s largest medallion. “

Presented to His Highness Sheikh Hamdan Bin Rashid Al Maktoum, the coin is one metre in diameter and 2.3 cm in thickness. The fine silver coin was crafted at the Damas factory through a complex process that involved many man-hours of work by experienced staff members.

Mr. Tamjid Abdullah, Deputy Managing Director of Damas Jewellery, said: “The unique 22 kt gold plated silver medallion was manufactured as our tribute to His Highness Sheikh Hamdan for his visionary leadership and support to strengthen the country’s medical sector through his patronage of the Sheikh Hamdan Bin Rashid Al Maktoum Award for Medical Sciences.”

He added: “Professionally, it was one of the most challenging work carried out by the Damas team, and highlights our capability in undertaking complex jewellery manufacturing processes. Not only did it call for the use of modern technology but also human expertise, which underscores how Damas balances cutting edge creativity with modern technology to create master-crafted jewellery.”

The coin initially weighed 195.2 kg before the painstaking work of engraving began. Several expert technicians worked on engraving the image of His Highness Sheikh Hamdan on the coin, which was then buffed, polished and steam-cleaned. The 22 kt gold plating work followed, and the landmark achievement was endorsed as the World’s Largest Coin-Like Medallion by a visiting team from the Guinness World Records.

Operating in 18 countries with more than 500 stores, Damas has a network of retail outlets in the Middle East, India Europe, North Africa and other regions. The Group’s stores offer own branded products as well as products sold under leading global and regional luxury brands.
Posted by Dubai News at 5:39 AM