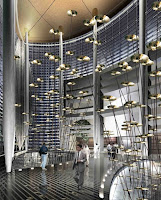 Dubai, UAE; May 27, 2009: Emaar Properties, the developer of Burj Dubai, the world’s tallest building, has announced that visitors to the iconic tower will be welcomed with more than 1,000 specially commissioned pieces of art that will adorn the interiors of Burj Dubai and the surrounding Emaar Boulevard, when it opens later this year. With art pieces from prominent Middle East and international artists, visitors will experience a breathtaking artistic tribute to the spirit of global harmony.

Amongst the specially commissioned art for Burj Dubai, occupying pride of place in the tower’s residential lobby will be World Voices by the internationally renowned artist Jaume Plensa. Plensa’s masterpiece in titanium and alloy was hand-picked by Emaar Chairman Mr Mohamed Alabbar following a year-long selection process led by the building’s architect Skidmore, Owings & Merrill LLP (SOM) of Chicago.

Jaume Plensa’s World Voices is composed of 196 cymbals that represent the 196 countries of the world - symbolic to Burj Dubai being a collaboration of people from across the globe and befitting its global iconic status. Cast in bronze and brass alloy and plated with 18-carat gold, the cymbals are horizontally suspended onto titanium rods anchored at the bottom of two pools, symbolizing reeds in a lake. Finished by hand, the cymbals create a distinct timbre as they are struck by dripping water, which the artist compared to the sound of water falling on leaves.

Speaking on the art focus for the tower, Mr. Alabbar said: “Art is central to the Burj Dubai project, not only as a visual statement but as a means to link cultures and communities. Thousands of people from around the world have collaborated to achieve an iconic landmark, the world’s tallest building. By assembling one of the world’s largest collections of art and sculpture from leading Middle East and international artists, we are celebrating their endeavour and the global significance of Burj Dubai.”

He said: “World Voices will be a compelling addition to Plensa’s astonishing canon of public work. It takes inspiration from Dubai and sends a positive message to the world.”

Burj Dubai’s architects and interior designers Skidmore, Owings & Merrill LLP (SOM) approached international and Middle East-based artists to submit concepts for the centrepiece of the Burj Dubai’s residential lobby more than a year ago. Plensa’s winning design was chosen from a shortlist of five.

George Efstathiou, the Managing Partner for SOM leading the Burj Dubai team said, “The 1,000 art pieces will include a wide range of contemporary artists as well as museum-standard historic art recognising the Gulf’s unique heritage.”

He added: “A part of SOM’s tradition is a strong connection of their projects with the art world. SOM has worked with leading artists from the world including Picasso, Miro, Calder and now Jaume Plensa.”


Nada Andric, an SOM Associate Director leading Burj Dubai’s interior design, said, “World Voices captures the international optimism and inclusiveness of Burj Dubai and is intimately connected with Dubai and the region. The sound of water is pervasive in the Middle East, where fountains are typical ornaments in the courtyards of traditional houses. The flower-like architectural vernacular of Burj Dubai is recreated by the reeds that hold up the installation’s cymbals, and their gentle movement and delicacy makes a fascinating contrast with the geometric vastness of the tower.”

In his proposal for World Voices, Jaume Plensa wrote, “The residential lobby area of Burj Dubai will be a meeting place of diverse cultures and nationalities - a metaphor of the diversity of our global society…World Voices is homage to this diversity and a celebration of life.”

During the artist’s recent visit to Burj Dubai site, he said “Burj Dubai is a body and a house; my piece is at the entrance of the house and creates a soul inside the body.”

Born in Barcelona in 1956, Plensa is one of the world’s most celebrated contemporary sculptors. His innovative sculptures combine seemingly disparate materials such as light, metal, glass and water in installations and sculptures which are both intensely physical and profoundly metaphysical. For over thirty years, Plensa’s oeuvre has explored the body and space, often incorporating text and language. Using an eclectic group of materials he has developed a unique visual language which expresses his idea of the harmony between body and soul. World Voices is the artist’s largest permanent indoor installation and his first permanent commission in the Middle East.

One of Plensa’s most famous works is the Crown Fountain in Chicago. Comprising two 16-metre high towers, glass, stainless steel, LED screens, light, wood, granite and water, Crown Fountain has become a beloved icon of the city. Like World Voices, Crown Fountain employs the sound and coolness of water to engage a community.

Plensa has exhibited internationally in numerous museums world-wide and is represented in fifty-five museum and public collections. He has completed thirty-five public commissions, including Dream in St. Helens, Liverpool, England, which has been shortlisted for the Marsh Prize; Breathing, a monument to fallen journalists at the BBC Headquarters in London; Seven Deities of Good Fortune in Tokyo, Japan; and Nomade, in Des Moines, Iowa.

Standing tall at over 800 metres, Burj Dubai is at the centre of Downtown Burj Dubai, a 500-acre mega project described as the new heart of the city of Dubai. The tower features the Armani Hotel Dubai and Armani Residences, corporate suites, exclusive residences, and health and fitness facilities. Burj Dubai is adjacent to The Dubai Mall, the world’s largest shopping and entertainment destination, and The Dubai Fountain, the world’s tallest performing fountain.
Posted by Dubai News at 3:37 AM