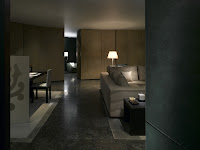 Dubai, UAE; May 5, 2009: Armani Hotels & Resorts, a collaboration between Emaar Properties PJSC and Giorgio Armani S.p.A, will showcase the flagship Armani Hotel Dubai at its pavilion at the prestigious Arabian Travel Market (ATM) 2009 in Dubai from 5 to 8 May 2009.

Located in the iconic Burj Dubai, the world’s tallest building, construction of the Armani Hotel Dubai is progressing according to plan, with completion scheduled before the end of 2009.

Bringing to life the “Stay with Armani” lifestyle, Armani Hotel Dubai will feature 160 luxuriously appointed guest rooms and suites that have been, along with the entire hotel, personally designed by Giorgio Armani, one of the foremost fashion icons in the world. The opening of the hotel will mark the official debut of Giorgio Armani in the world of hospitality.

Giorgio Armani said: “Armani Hotel Dubai is a passionate project for me. I have been fascinated by the evolution of Dubai, and Burj Dubai will be an iconic building of the city.”

He added: “With the hotel, I am bringing the “Stay with Armani” promise to reality. I have been personally involved in all aspects of the hotel’s design and every component has been carefully conceived to create an exquisite and intimate lifestyle experience.”

Exclusively located from Concourse to Level 8, and on Levels 38 and 39 of the iconic Burj Dubai, the hotel will have a dedicated “Grand Entrance”, and will introduce several firsts to the region, including the highly sought-after Armani/Spa, which will be the world’s first ever in-hotel Armani/Spa. It will feature the Middle East’s first Armani/Privé – the hip and upmarket nightclub – and also house an Armani/Fiori floral shop, an Armani/Dolci shop and an Armani/Galleria.

“Armani Hotel Dubai will be an icon for the global hospitality industry – both in terms of its inimitable location and the personal involvement in all aspects of design by Giorgio Armani himself,” said Mohamed Alabbar, Chairman, Emaar Properties. “The opening of this world-first hospitality initiative is another testimony to Dubai’s ability to implement innovative projects through international collaborations.”

With its unparalleled diversity of choices, the hotel will define new standards in hospitality services, and will be differentiated by Giorgio Armani’s personal touch in its design and décor. The hotel will be further complemented by the Armani Residences Dubai, also located in Burj Dubai, which were launched to strong international investor response.

The hotel will be home to the finest food and beverage choices, including authentic Italian, Japanese and Mediterranean cuisine, and a modern Indian restaurant. With emphasis on the highest service standards, Armani Hotel Dubai will include 24-hour in-room dining and in-residence entertainment, and round-the-clock valet services and access to the Business Centre.

Additionally, the hotel will offer Armani/Events, a specialized events service that builds on Dubai’s global standing as a conference and meetings destination. Under this initiative the Armani Hotel Dubai will offer 30,000 sq ft of conference and banqueting facilities – including the Armani/Ballroom and the Armani/Pavilion, a spacious outdoor area for up to 350 guests. The hotel will also have multi-function meeting rooms, dedicated boardrooms and flexible meeting lounges.

The Armani Hotel Dubai was the first hotel to be announced under the exclusive collaboration between Emaar Properties and Giorgio Armani S.p.A to launch a collection of hotels, resorts and residences across key cities worldwide.