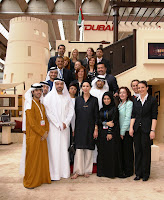 IMEX-2009 SEES PARTICIPATION OF 3500 EXHIBITORS FROM 157 COUNTRIES
For the seventh consecutive year, Dubai is having a strong presence at the Worldwide Exhibition for Incentive Travel, Meetings and Events (IMEX) which is underway in Frankfurt until May 28.
The IMEX-2009 edition sees 43 co-participants from Dubai’s expanding tourism industry sharing 355-square-metre Dubai stand with 28 booths under the Dubai Department of Tourism and Commerce Marketing (DTCM) umbrella.
The DTCM invited the Business Tourism industry decision-makers, the co-participants and the Media representatives for a “Dubai Starter Snack” at the Dubai Stand on May 26 and 27.
The DTCM delegation is led by Mr. Eyad Ali Abdul Rahman, DTCM Executive Director Media Relations and Business Development, and includes Mr. Hamad Bin Mejren, DTCM Executive Director Business Tourism, Mr. Saleh Al Geziry, DTCM Director Overseas Promotions, Mr. Mohamed Al Muhairi, DTCM Head of Overseas Promotions’ Canada and USA Region, Mr. Jerad Bachar, Director Dubai Convention Bureau, and Mr. Abdulla Yousef, Sales Executive Dubai Convention Bureau.
The strong commitment of DTCM in promoting Dubai as the leading convention and meeting hub in the Middle East region ensures that the Business Tourism sector has a promising future in Dubai.
Mr. Eyad said Dubai’s strong participation in IMEX over the years reflects the keenness of DTCM in promoting Dubai strongly in key source markets, including tapping the Meetings, Incentives, Conferences and Exhibitions (MICE) industry. Germany, he said, has remained a major source market for Dubai’s tourism industry.
Mr. Hamad Bin Mejren, DTCM Executive Director Business Tourism, said: “Dubai has risen in the ICCA ranking from 93 in 2007 to 50 in 2008. This is a great achievement and the results reflect our efforts to bring Dubai to the top destinations worldwide in the Business Tourism market.”
Mr. Saleh Al Geziry, DTCM Director Overseas Promotions, said the department has given a major boost to its already aggressive marketing and promotional drive in order to boost visitors’ numbers to the emirate and enhance hotel occupancy levels.
The IMEX-2009 showcases the best of Dubai in terms of facilities for the Business Tourism Industry. The co-participants are highlighting various conferencing and exhibition infrastructure in the emirate.
For the first time a delegation from the Dubai Police, comprising of Lt. Colonel Nasser Abdul Wahed Al Awar, Lt. Colonel Hassan Mohammad Tamim and Sergeant Jaber Abed Mohammad Jaber, is participating at IMEX and promoting the launch of a specialized department which will be exclusively engaged in protection of tourism in Dubai.
Over 3,500 exhibitors from 157 countries are attending IMEX 2009. A rise in the number of hosted buyers attending IMEX 2009 combined with hundreds of new exhibitors, a total of 70 educational events & forums and 14 new vision industry initiatives; mark this year’s show out as one of the most business-centered and exciting to date. As many as 43 stands have increased their space at IMEX 2009 with high demand experienced from all corners of the globe.
Posted by Dubai News at 3:38 AM