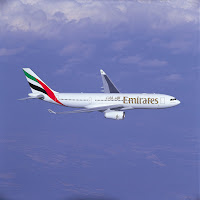 DUBAI, U.A.E, 29th March 2009: Reinforcing and strengthening the airline’s commitment to the Middle East, Emirates has today announced increased services to three of its key regional gateways including; Dammam, Beirut and Tehran.

“The Middle East is one of the most active aviation markets in the world and an integral part of Emirates operations,” said Ahmed Khoory, Emirates' Senior Vice President Commercial Operations - Gulf Middle East & Iran. “The addition of these flights has been implemented in recognition of the increased demand for services across the Middle East and will provide much needed capacity on these perpetually busy routes.”

“The enhanced capacity will also offer excellent connections to Emirates extensive global network as well as provide extra flights for the thousands of expatriate residents who live and work in Dubai but whose family is still based in their home country.”

Recent statistics released by the International Air Transport Association (IATA) show that demand for services across the Middle East grew 3.1 per cent in January 2009 despite the global economic downturn, with Emirates well placed to capitalize on this growth.

The additional flights to Beirut, Dammam and Tehran marks the second significant increase in flights across the Middle East for Emirates - in February Emirates added capacity to Amman, Riyadh and Jeddah - bringing its weekly operation to: seven flights to Dammam, 17 flights to Beirut and 21 flights to Tehran.

The airline has an extensive Middle East network covering 14 cities with 180 flights per week. With the additional flights to Dammam, Beirut and Tehran starting May 2009, Emirates will serve the region with 187 flights per week.
Posted by Dubai News at 12:07 AM